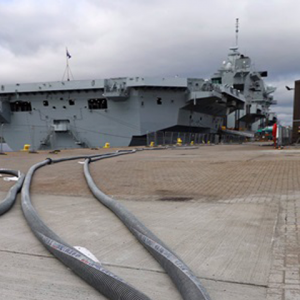 Refuelling the warship presented a problem as it required over 4,000,000 litres of fuel to meet the ship’s power requirements. Therefore, taking the fuel on the road would have required 120 road tankers for each fuel stop and it would have taken up to two weeks to complete.

To transport the fuel from Gosport in Hampshire to Invergordon, two defence contractor fuel tank ships from James Fisher Everard were used. Both cargoes were pumped with F-76 fuel at the oil fuel depot in Gosport.

James Fisher Everard, one of the few remaining British owned and operated tank-ship companies, sourced a total length 500 metres of Dantec composite hoses from Dantec’s specialist marine distributor Fendercare Marine in Seething, UK. The hose assemblies were fabricated in 25m flanged sections in Dantec’s manufacturing facility in Wirral and shipped in rapid time to Invergordon to allow fuelling of the HMS Queen Elizabeth using them in 2 x 250m long strings. The use of these hoses allowed an outcome of two safe and efficient fuelling operations to allow the ship to continue with the sea trials. Dantec composite hoses provided a crucial solution to overcoming this challenge and ultimately enabling HMS Queen Elizabeth to complete its initial sea trials on time.